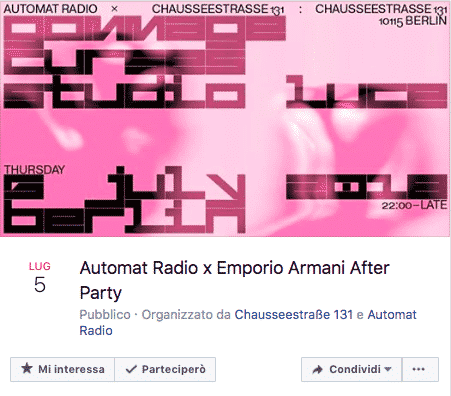 After Emporio Armani in-store party, we’re moving to Chaussee131 where Automat Radio brings its sound from 10PM ‘til late.

Versatile and surprising Djs who tell a different experience every time they’re behind the desk, Gommage DJ Team are the two partners in music Dj Kramer and Claudio Fagnani.
They are linked by a decade of friendship and a common passion for electronic music and outdoor parties. Basic pillars of Automat Radio.

Curses sounds like something from an illegal galactic warehouse party with flashes of ’80s Italo-disco and New Wave.
The New Yorker/Berlin based artist’s sets and productions are anchored in the deeper side of things, incorporating his signature ghostly vocals and guitar.
With a slew of releases on labels such as Bordello A Parigi, Throne Of Blood, SC&P, Wrong Era, Ombra INTL, and a Rinse France radio residency, Curses continues to hiss and kiss in clubs worldwide.

Franz is the head of Slow Motion, an Italian dance label based in Berlin, he has releases on World Unknown, Tusk Wax and Bordello a Parigi and with his side project Studio Luce on Cocktail d´Amore Music. Franz also established many events around the german capital such as the Wrong Era, Bar Noir or Discoteca Paradiso parties, New Dance Fantasy or Magic Waves Festival. Beside long time collaboration with Sameheads he is regular at Griessmuhle and Salon zur Wilden Renate. 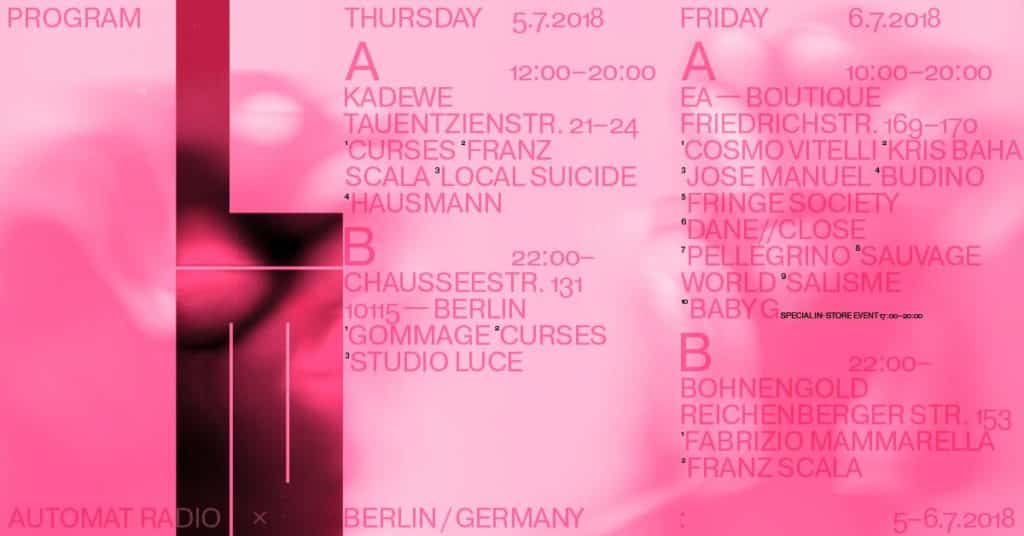 Automat Radio
Independent radio station based in a VAN constantly on the road, broadcasting alternative music and cultures, powered by Emporio Armani.