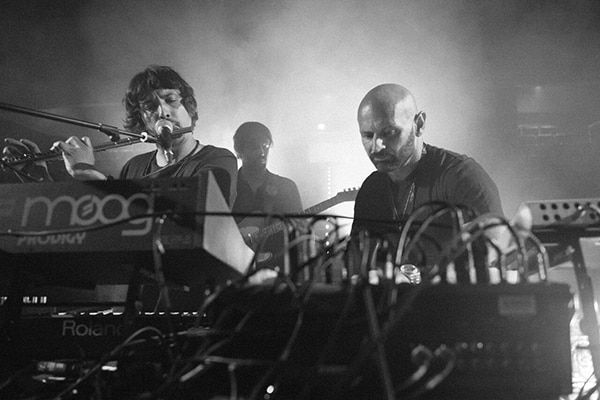 Bridging the italian house tradition with a touch of modern funk, Davide Santandrea, better known as Rame, and the brothers Riccardo and Francesco Cardelli, are making a name for themselves nowadays under the Capofortuna moniker. Mixing different experiences and backgrounds, Capofortuna channels the Italo-disco/Italian house tradition driving it towards a contemporary musical horizon made up of relentless, warm and seducing grooves performed live with instruments and analog hardware. Rame, being grown up in the Riviera Romagnola, the beating heart of the italian club scene, has had the chance to play as resident dj at the legendary 90’s venue Echoes Club, sharing monthly the dj booth with people like Frankie Knuckles, David Morales, Satoshi Tomiie, Louie Vega and Tony Humpries to name a few. At the end of the 90’s, alongside pals Dino Angioletti & Uovo, gave birth to “Pastaboys”, dj and studio trio that marked an era in the House scene, producing hit sas “On & On”, “Soul Heaven”, “Let The Sunshine” and collaborating with artists such Grammy award winning dj/producer “Osunlade”, Iconic House duo “Masters At Work” and remixing “Ame’s” biggest track to date yet ”Rej”. Ricky Cardelli, ecletic polinstrumentalist & singer, starts touring Europe and making experience with different genres since a tender age. In 2008 Ricky lays the foundation of “Funk Rimini”, his own first band, experimenting with Funk, Disco and Hip Hop. Franz, better known as Crimson, bassist and guitarist of the band, is active as musician since the end of 90’s. About to graduate in computer music and sound technologies, he composes music and provides sound design for movies, documentaries, tvs and radio adverts. Since Capofortuna’s inception, back in 2017, the trio’s output has been warmly welcomed in the dj sets of artists such as Peggy Gou, Jus Ed, Soul Clap and many others. With an album to be released in 2019 and a gigs schedule getting always busier, Capofortuna sounds to be one of the main live projects to keep en eye on for the time being.