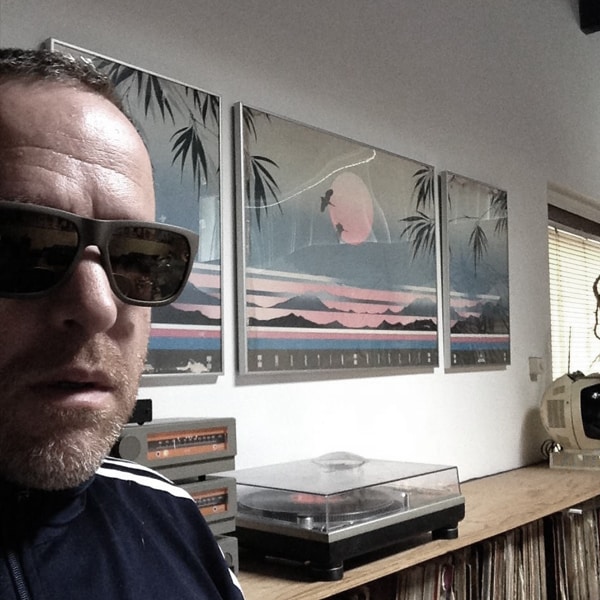 It must have been around 1982 when i figured out how to mix, using two of those 60’s portable turntables with built in speakers and no pitch control, by calculating the BPM’s and then only mix records wich are roughly the same BPM. On top of that my record collection then consisted primarily of 60’s 7″ singles wich are rarely metronome tight, so i really had to stay focused to keep things in sync.

There are not many music genres that really turn me off and i can always apreciate a good piece of music, even if i don’t like the genre or the people behind it. Plus there are things to learn from every kind of music.

Growing up in the 80’s in The Hague made me like italo disco because that’s what was playing on the radio. Always !! It is probably rammed in my subconciousness forever.

Around 1985 i started playing bass guitar in a school band because there was already someone playing drums. After a few years of playing in bands i liked the fact i was playing music myself, but didn’t like it the songs were mostly covers. In 1991 in a band called Kuntebe wich also included Turntable Wizzard dj OVERDOSE, my homeboy for some 25 years by now, we were playing self written material sounding like a mix of the Doors, the Peppers and 24-7 Spyz, but it never really worked out.

Not much later i got myself an Akai S-900 and an Atari 1024st, and never left my room again. Amazing what you can cramp out 1 MB of sampling space if that’s all you have!

Encouraged by the very fast producing and releasing of 12″s by Roland Klinkenberg (whom i shared a house with at that time) and because i finally managed to actually finish some songs, and not just fiddle along for days and months with beats and a Juno 106 that i by that time had added to my set up, in 1996 i released my first 12″.

After three follow ups, i started working with OVERDOSE again, in 1998 crowned ourselves NOVAMEN, and in 1999 debuted on MURDERCAPITAL records. Released our fifth EP in 2006 and are still rocking the planet!

In 1999 i also met this funky dude called Geoffrey T, who seemed to share my love for 80’s drummachine-funk from the likes of ZAPP, PRINCE, CAMEO etc. We formed a project called BUMPER and bumpy-bassline-vocodered ourselves through life ever since. We debuted on the californian label MDEX in 2004, and are still dropping jams !

Around 2002 original Miami Bass Bending dj TECHNICIAN, a friend for close to 20 years, and me decided to share our passion for italo with the world, suddenly became MATZO&PAULI, and debuted in 2004 on VIEWLEXX. The follow up is sceduled in 2008 on CyberDance.

Since, also as occasional dj back in the days, i never adapted an artist alias, in 2005 i decided to just keep my real name as a name: Mr PAULI … Also already being half of MATZO&PAULI…